There’s nothing horror fans love more than imagining their favorite characters facing off against one another. And with box office successes like Freddy vs. Jason, Alien vs. Predator, and Sadako vs. Kayako, there’s definitely money in it.

Usually, the only real obstacle (besides getting enough buzz to greenlight it) is the fact that different characters and franchises are owned by different studios, and they don’t always play nicely.

So, just for a fun thought experiment, here are 5 different horror crossovers that are both awesome, and possible!

Nightmare on Elm Street and It

The Pitch: A child who grew up having nightmares of Freddy Krueger moves from Elm Street, Ohio to Derry, Maine during a year that Pennywise is active. Freddy still shows up in the kid’s dreams, but now finds a rival competing for the child’s fear!

Both of these iconic characters gain their strength from fear and it would be interesting to see which one of them scares children more. Given that Pennywise is an interdimensional demon, it wouldn’t be that farfetched for him to show up in the dream world.

Their battle could be swayed back and forth depending on which one of them is more frightening to the bystanders. Plus, they’re both known for the sarcastic and darkly hilarious one liners, so it would be a very entertaining fight to watch!

The Pitch: Following the ending of 3 From Hell, we see Otis, Baby, and Winslow free and hiding out in Mexico. They escaped prison, escaped the vengeance of Aquarius, but could they escape being tested by Jigsaw himself?

They could wake up in a series of tests where Jigsaw forces them to confront their own evil deeds, and symbolically atone by shedding the same horror they’ve inflicted on others.

It could even take place at their ranch, where they are forced into the caverns beneath to face off with Dr. Satan (whom Jigsaw is using).

Even though Jigsaw is long dead, he very easily could have left behind plans for the game to be played, and Dr. Gordon could be the one orchestrating it all.

Friday the 13th and Gremlins

The Pitch: Billy and Kate’s now adult son has inherited Gizmo from his parents, and goes with his own wife and children for a vacation at Camp Crystal Lake. Gizmo inevitably ends up getting wet, which spawns Gremlins, some of whom accidentally bring Jason back from the bottom of the lake.

We’ve already seen Jason fight Freddy, but it would be really fun and entertaining to see him battle with an army of small creatures. They could find ways to overpower and overwhelm him, while he could slice them up with his machete.

When most people think of crossovers, they only think of pitting Jason against other slashers or Gremlins against other small monsters (like the Critters), but this would be a truly unique concept!

The Ring and Pet Sematary

The Pitch: Samara’s video finds its way over to Maine where someone watches it and then promptly dies seven days later. Only they get buried in the infamous graveyard and come back, only to watch the video again. This time, Samara comes for them and realizes the power the ground that went sour.

They then join forces to get as many people to watch the tape as possible, just to bury them there, thus creating an army of the undead. Even Samara herself could have someone dig up her own body and bury it there so that she can take physical form again.

Hocus Pocus and The Omen

The Pitch: In order to protect the his son Damien, the devil springs the Sanderson sisters out of hell and sends them to Earth to be his new nannies.

Hilarity ensues as they try to conceal the fact that they’re witches, and blend in with the normal world, all while taking Damien on playdates, but also helping him to realize his full potential in bringing about the apocalypse.

Bonus – Hatchet and Behind the Mask: The Rise of Leslie Vernon 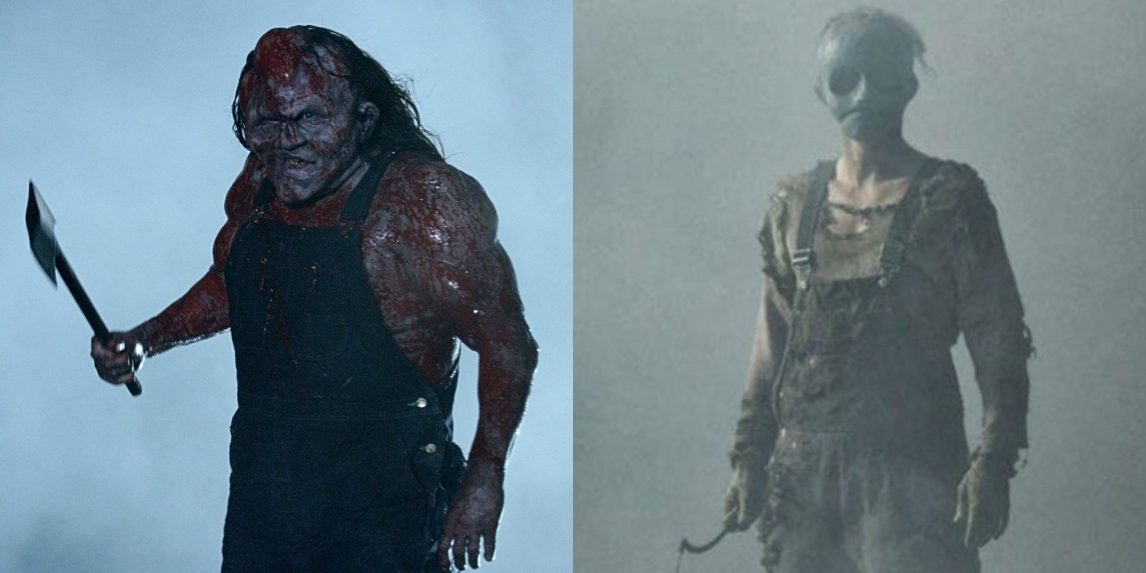 The Pitch: Technically these two already exist in the same universe, as Leslie Vernon was referenced in Hatchet II.

But it would be really interesting to see him come down to New Orleans with a documentary crew and give us a meta take on horror crossovers.

We already saw Vernon deconstruct the slasher from the killer’s perspective, but what if his opponent wasn’t a final girl, but rather a fierce slasher villain like Victor Crowley?!

Which of these would you want to see most? Let us know in the comments!