The last 14 months have been pretty rough on everyone, but much like they did last year, Shudder is helping to make things better with their amazing “Summer of Chills” lineup!  Running from June 3rd (which also happens to be my birthday) to August 19, Shudder will be releasing a new Original/Exclusive film every single week.

The lineup includes something for every type of horror fan with slashers, thrillers, horror comedies, and supernatural terrors, along with a new Barbara Crampton release that’s been making waves across the internet and a long lost George A. Romero film destined to be a classic!

Check out the full lineup:

Leaning heavily into the theme of isolation, this psychological thriller deals with a drifter with memory loss taking a caretaking job for a troubled woman in an abandoned house on an island.

That one sentence alone contains more dread than many horror films are able to squeeze into the first act.  A story like this seems ripe for twists and turns, and it comes from writer/director Damian McCarthy, making his directorial debut.

The background behind this movie probably deserves its own documentary because of how strange it is.  Back in 1973, a young George A. Romero was commissioned by a Lutheran church to make a film about the tragic reality of elder abuse.

So he shot this movie about an elderly man going to an amusement park and facing some pretty disturbing and terrifying horrors.  The church that hired him was so appalled at the footage he brought them that the movie was never released and has remained dormant for nearly 50 years.

It was then recently restored in 4k by IndieCollect and will now finally get a major release via Shudder’s platform, giving fans one last chance to enjoy a “new” George A. Romero film years after his death.

This Russian horror film is set during the Cold War with a secret facility deep under the water making a shocking discovery.  What they find winds up becoming a threat to all of humanity itself.

Much like 2020’s Underwater, or John Carpenter’s The Thing, setting a horror film at a research facility isolated from civilization makes for a great setting for monster horror.  Hopefully this one delivers the way that the others did. 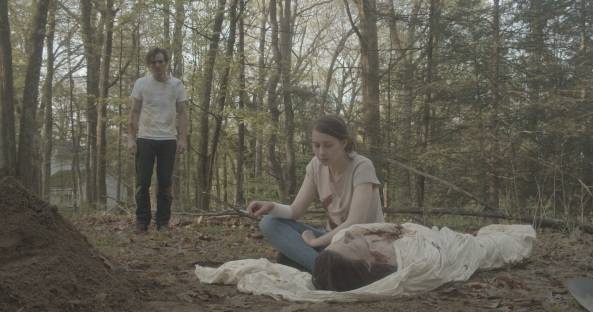 Taking more a dramatic approach, this supernatural horror film deals with trauma and grief, while also getting a little close to Pet Semetary it seems.  Its synopsis mentions a grieving husband who returns to the site of the car crash where his wife died, and performing some sort of strange ritual.

A horror movie critic in the 1980’s find himself in a self-help group for serial killers and tries to stay alive.  Honestly, that sentence is all you really need to be intrigued by this horror comedy which will hopefully be just as clever and meta as its synopsis suggests!

After escaping a cult, a mother must protect her son from both a mysterious illness and the cult itself.  This one promises nonstop tension, and stars Andi Matichak, aka Laurie Strode’s granddaughter Allyson in the new Halloween trilogy.

Starring two icons of modern horror, Lin Shaye (Insidious) and Tobin Bell (Saw), this movie will automatically be the intrigue for many fans, but it also has a pretty cool premise as well.  Set in the 80’s and dealing with a group of friends trying to survive in a creepy house, they’re allowed one phone call, which according to the synopsis could “change their life”.

This French horror film deals with a Moroccan legend known as Aicha Kandisha, a sort of succubus type demon that specializes in deadly vengeance.  Based on her MO, her legend seem similar to that of the dybbuk of Jewish folklore.  The movie itself deals with a girl who summons Kandisha out of anger, but now must figure out a way to contain the horrors that have been unleashed.

The Boy Behind the Door (July 29th, Shudder Original)

Dealing with two abducted boys trapped inside a building while trying to escape a kidnapper, this thriller seems tense just at the mention of its premise.  Children in peril is an often controversial story thread, but if done right, it can be a source of really compelling horror.

It’s been a little while since we’ve had a good werewolf movie, and this French monster horror films seeks to change that.  The titular character Teddy is bitten by some beast, and starts to unleash the inner animal inside.  Need we say more?!

Another tale of isolation, this thriller deals with a paranoid woman who believes that her friend (whom she’s staying in a cabin with) is drugging her and stealing her blood.  Amidst all the fear and violence, it also reflects on themes of intimacy and codependent relationships.

After its recent limited release in theaters, Jakob’s Wife has been getting a lot of buzz across the internet.  Starring horror legend Barbara Crampton, and from the director of the hidden gem Girl on the Third Floor, Jakob’s Wife deals with a midlife/mid-marriage crisis that yields deadly results.  Crampton is an immensely talented actress and it sounds like a lot of fun to get to see her play with a villainous role (much like she did on Creepshow Season 2).

Check back for full reviews as each of these movies come out.  Which one are you most excited for?  Let us know in the comments!

All of these titles will be streaming on Shudder this summer!