Nearly 12 years ago, the original Paranormal Activity absolutely dominated the horror genre.  Not only does it remain one of the most financially profitable movies ever made (grossing $193 million on a $15,000 budget), but it spawned an entire franchise as well as a wave of found footage imitators that only recently died out in trend.

Reborn
While the teaser is only 30 seconds long, it immediately catches our attention with that fact that portions of the movie don’t seem to be “found footage” at all.  We see a group of people in some sort of Puritan cult, shot in glorious HD without a hint of shaky cam or people acknowledging the camera.

But for those who enjoy the found footage aesthetic, other snippets of scenes do feature that signature style.  So it almost looks like part of it will be shot like a regular movie, while other parts will lean on the “characters holding a camera” trope.

This was previously done with varying degrees of success in 2006’s Behind the Mask: The Rise of Leslie Vernon.  In that film, the first two acts are a mockumentary, while the third actually becomes the slasher film.  Tonewise, it’s a difficult balance to strike and it will be interesting to see how this movie pulls it off.

Skipping Theaters
The original movie’s superb ad campaign included footage of moviegoers startled out of their seats in theaters.  So it’s admittedly somewhat disappointing to see that this new beginning of the franchise won’t get the same treatment.

But given the current state of world affairs, as well as the fact that the series had diminishing returns with each sequel, it makes sense that this would be released straight to streaming, even if there wasn’t a worldwide pandemic.

While this won’t be measured by box office, we can assume that if enough people stream this and/or sign up for Paramount+., we’re probably in store for another slew of sequels.  But we might be getting a little ahead ourselves at this point… 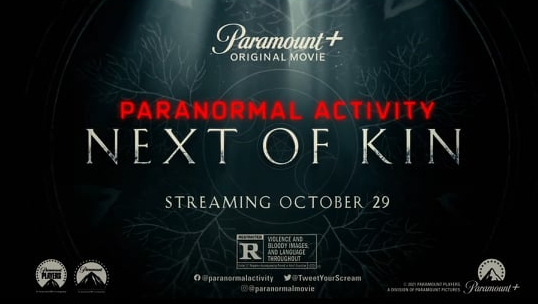 Check out the Teaser Trailer here!

What did you think of the teaser trailer?  What do you hope to see most in this new entry?  Let us know in the comments!

Paranormal Activity: Next of Kin will be streaming exclusively on Paramount+ on October 29, 2021!