Shudder’s 61 Days of Halloween has been an absolute treat, which has included another season of Creepshow.  Alas, Season 3 has come to its end.  But it’s an amazing finale that will hopefully lead to another season in 2022! 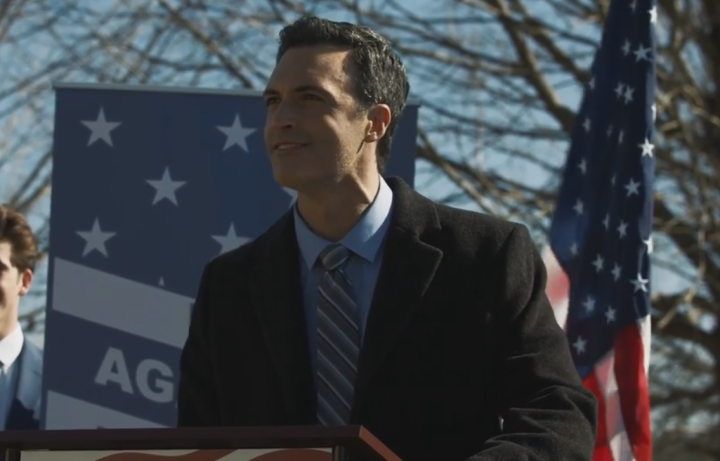 Opening with what could easily be a real political ad, we see a Congressman played by Reid Scott (Veep, Venom) advocating for lower healthcare costs for Americans.  In a publicity stunt, he’s traveled up to Canada with a group of citizens to buy cheap meds, and is now returning to the US.

At the border crossing, they are greeted by an Officer played by Michael Rooker (Henry: Portrait of a Serial Killer, Guardians of the Galaxy, Slither, The Suicide Squad).  He notices that a woman traveling with the Congressman’s group appears quite sick, and pulls her (and her mother aside), citing that they’re carrying way too much medication to be legally allowed to cross from Canada into the U.S.

Following a political debate between the Congressman and the Officer, which has both of them revealing viewpoints you wouldn’t expect, the sick woman starts to turn into a monstrous creature.  Her mother pleads with the Officer that she just needs her medication, but it’s too late, and everyone at the border crossing pays the price by being massacred.

Now an unlikely team forms between the philosophically opposed Officer and Congressman.  In a story that very blatantly deals with real life social/political issues, there’s a blend of not so subtle commentary with a genuinely clever sense of humor.

Firstly the law enforcing Border Patrol Officer with a Southern accent is much more left-leaning than you’d expect, and the left-leaning Congressman who touts liberal agendas is really just a tool who says whatever he needs to in order to get elected.

For those who are frustrated with real life politicians paying lip service to left-leaning issues while actually being a huge hypocrite will feel vindicated by Michael Rooker’s straight-shooting Officer calling him out for it.

In the end, it’s them working together that stops the threat.  However, they also point out that had the woman just been able to get her medications in the first place, the problem wouldn’t even have happened.

Horror has long been a tool to explore social/political issues by extrapolating it to the most extreme.  In this case, it’s done with monster horror, and it demonstrates how the system itself pits different groups of people against each other, who are much stronger when they work together.

And of course, it rightfully calls out the many “progressive” politicians who are great at spouting off their talking points, but when push to come shove, they don’t really do anything about said issues. 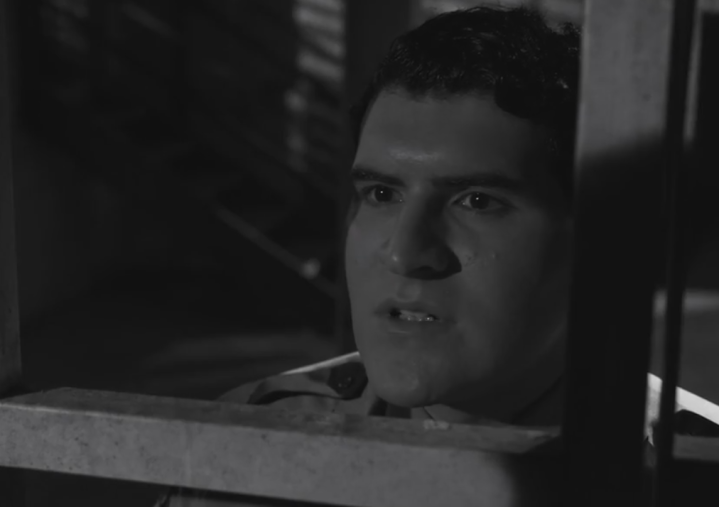 Directed by John Harrison, Screenplay by Heather Anne Campbell, Based on a Short Story by Craig Engler

Adapted from a short story written by Shudder GM Craig Engler himself, this story was originally featured as part of an anthology book titled “Nights of the Living Dead”.  It’s a collection of stories that all take place the same night of the zombie outbreak in Night of the Living Dead.

Opening at a police station in 1968, we see the Chief of Police Evan Foster, played by Cristian Gonzalez (Halt and Catch Fire, What Men What) suiting up while a very familiar radio broadcast plays, referencing an epidemic of violent murders where the murderers seem to be feasting on their victims.

As he steps outside an angry group of townspeople are gathered, ready to take the law into their own hands to go after the mayor’s son Cliven Ridgeway, who’s nefarious actions have harmed everyone in town, but because he’s the mayor’s son he thinks he’s untouchable.

Vowing to keep them from becoming a band of vigilantes, he goes looking for Ridgeway himself.  All the while, dealing with the zombie outbreak that’s spreading into his small town.  After finding Ridgeway with a dead body (which was clearly a zombie), Foster arrests him for murder and takes him back to the station.

However, he discovers another piece of evidence that proves that Ridgeway did in fact murder the daughter of the one of the townspeople.  Calling them all back, Evans now seems on board with vigilante justice, especially given the fact that society seems to be crumbling with the zombie apocalypse.

In a sickening twist, we see that girl he murdered was in fact a child.  The townspeople and Evans bring her into Ridgeway’s cell tied up in a sack and unleash her inside.  Now in zombie form, she doles out poetic and cosmic justice to the man that murdered her as she rips out this throat and he dies screaming.  The only fate worse than death is knowing that he will turn as well but still be locked in his cell, unable to feed.

Between the black and white aesthetic, the newsreel footage lifted directly from the original movie, and the overall sense of dread about the impending end of civilization, this story does a decent job of recreating a world that we’ve all seen before.

Much like the book upon which it was based, it helped to globalize the events of Night of the Living Dead by demonstrating what many others were doing that same night.  The entire story works as a perfect homage, and it would be fascinating to see others adapted from that same book.

There’s also a real sense of tragedy with its ending.  Not just with the realization that a child had been likely violated, and then murdered.  But the simple fact that Evans loses his devotion to law and order and embraces vigilantism and mob justice.  As the zombie child devours her murderer, he laments at how perhaps they are all in hell and this is what they all deserve.

A lot of zombie lore deals with people simply trying to survive, but this one really touched upon the valid point that the mere existence of a post-apocalyptic world means the eradication of the world we currently know.  And with it all the semblance of humanity and civilization are long gone.

What did you think of this week’s finale?  What was your favorite Season 3 episode?  Let us know in the comments!

Creepshow is streaming exclusively on Shudder