WandaVision remains one of the most unique and creative projects to come out of the MCU.  Its weekly release schedule allowed for fans to speculate and theorize, and now that it’s all over, some are satisfied, others are not.

Either way, it was one of the most ambitious stories for Marvel to tell, just given out unconventional and surreal it got.  So with the final episode having aired, we thought it would be fun to look back on the miniseries as a whole, and rank each episode.

To be fair, we’re not saying any of these episodes are bad, just some are better than others.  And of course, this is all opinion-based and subjective.  Please comment below with your favorite/least favorite episodes!

While certainly not a bad episode by any means (see the previous paragraph), this one definitely broke up the really fun and strong rhythm that the first three episodes had built.

Granted, it was fascinating to see the after effects of the Blip, as well as a few familiar faces with Jimmy Woo and Darcy Lewis.

By this point, we were all curious about just what was going on with Wanda’s sitcom world, and it provided many of the answers.  On its own, it’s a solid episode that just came at the wrong time, or perhaps came too all at once.

It just felt like a complete derailment and maybe would have worked better broken up throughout.

Again, not a bad episode, just not a particularly great one.  A lot of fans have referred to this finale as a huge letdown, although that does seem a bit dramatic; especially if their reasoning is that their theories didn’t pan out.

No we didn’t get Mephisto, or a connection to the X-Men universe.  But what we did get was a decent conclusion to a complex and emotional story that didn’t quite have enough time to wrap everything up properly.  Wanda’s arc was certainly effective, but the people of Westview, as well as Jimmy Woo and Darcy were largely glossed over.

And let’s not get started on White Vision just disappearing, never to be seen or heard from (despite retaining all the memories and remembering his love for Wanda).  As a series finale, it could have been better, but it’s nowhere near the worst we’ve ever seen from television.

By this point in the series, the sitcom angle was losing its pertinence as the greater hex plot became more and more prevalent.  Wanda had expanded the borders, and Vision was fully committed to getting to the bottom of it.

So the entire Modern Family approach, while fun, just never had a chance to fully be utilized.  But this episode was still fun in other ways with the teaming up of Vision and Darcy (in fact it’s the last time we really see Darcy since the finale mostly forgot about her).

While it does end with creepy Agatha reveal (as well as the catchiest theme song ever), it just doesn’t quite hit all the marks it’s trying to. 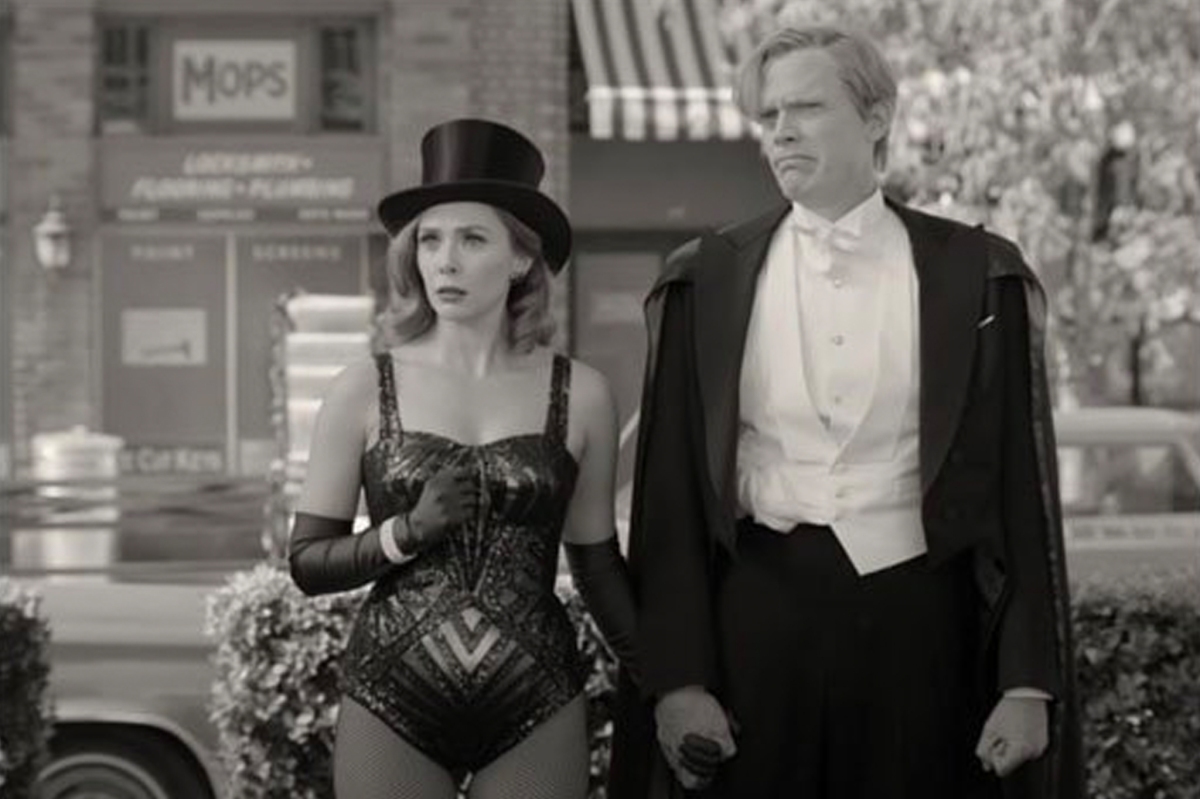 The series’ second episode advances from the 50’s to the 60’s while still maintaining the black and white visuals.  However, things like hairstyles, clothing, and settings are updated to reflect was series were like back then.

These first two are the only “pure” sitcom ones in that the outside plot hadn’t quite penetrated the storyline…yet.  For many, the first two episodes blur together because of this, plus the fact that they were released on the same day.

Honestly, the only reason this one ranks lower is that it didn’t have quite the same charm as the first episode.  A lot of the scenes were filmed outside, and thus didn’t have the live audience on soundstage sitcom vibe the first one did.  But it’s definitely a worthy and fun episode. 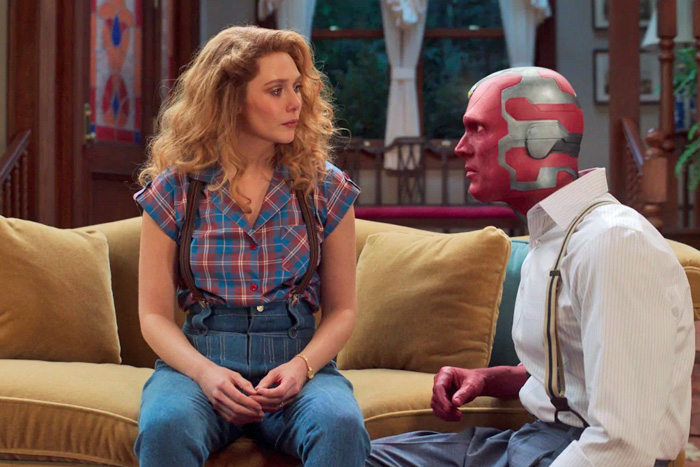 Following the reveal of the S.W.O.R.D. crew outside the Hex, this was the first episode to feature them as a B plot to Wanda and Vision’s A plot.  The balance worked out brilliantly and made for some of the most compelling episodes of the series.

In addition to the big reveal at the end with Evan Peters as Pietro, it was fascinating to see Vision digging deeper into what was going on with Westview and its residents.  Up until this point, we had only ever seen Wanda and Vision in their sitcom honeymoon phase.

And this was the first time (since Civil War) that we saw them coming down on different sides conflicting with one another.  The result was the beginning of both of their character arcs that would continue until the series finale.

The very first episode of WandaVision certainly had a lot to live up, as it was the first piece of MCU media to be released in nearly two years.  Some diehard MCU fans were disappointed at its lack of big budget effects or superhero action, but that’s never what it was meant to be (also that all happens at the end anyway).

But this first episode was an absolute delight in that it was unlike anything we’d gotten from the MCU before.  Between the massive chemistry between the titular characters, and the care and attention to detail given to recreate the 50’s sitcom world, it was just very refreshing to get something this unique.

It then kicked off a fascinating history of TV sitcoms week after week.  This first episode wasn’t beholden to any larger plot at the time, it was just allowed to breathe and have fun, and it really shows.

Following the end of Episode 2, WandaVision was brought into the vibrant, Brady Bunch-inspired world of technicolor!  This episode is particularly notable for the birth of their two sons, Billy and Tommy.

Admittedly there’s a personal bias here, as a parent of a toddle (and another baby on the way), it was a lot of fun to see them preparing the nursery and getting ready to be parents; especially the bit about having no idea what they’re doing.

Plus it features the first time we truly break from Westview with Wanda expelling Monica in an incredibly tense scene.  Plus this decade is a lot of fun aesthetically and just remains a great episode in terms of production and costume design.

Honestly, this was a tricky episode to place, and it ranks as high as it does simply for its emotional impact and amazing performances by both Elizabeth Olsen and Kathryn Hahn.  Granted, it does throw off the rhythm a little bit, as it’s entirely a self-contained flashback episode into Wanda’s past.

And of course, there’s nothing in here that we didn’t already know about Wanda (with the exception of Hayward lying about her stealing Vision’s corpse).

Despite this, the emotional beats hit as if we never knew this information about her.  This episodes shows us a Wanda who’s experienced nothing but loss her entire life, and reminds us why she did was she did in Westview, even if not morally justified in doing so.

Olsen’s performance here is tragic, heartbreaking, and challenging given that she’s playing Wanda at different points in her life.  So in addition to be the second best episode, it needs to be submitted for Elizabeth Olsen’s Emmy consideration campaign!

This will also be a reflection of personal bias as the name of this very site is Halloween Year-Round, but it’s not the only reason why this is the highest ranked episode on this list!

It continued the trend of the Westview A plot and S.W.O.R.D. B plot, gave us Evan Peters reminding us why he truly is the better Quicksilver, and for comic book fans, it was a lot of fun seeing Wanda and Vision in their original costumes.

This episode was really the last time that the sitcom gimmick really worked, before the series took its hard turn into typical MCU territory.  It gives us the very best of everything we love about this series, striking that perfect balance the series never had before or again.

WandaVision is streaming exclusively on Disney+