There are plenty of great werewolf films out there to watch, enjoy and be scared by. But when it comes to comedic parodies of the werewolf mythos, none can hold a fang to the over-the-top 1981 horror-comedy gem Full Moon High.

Written, directed and produced by Larry Cohen (The Stuff, Q: The Winged Serpent), Full Moon High is the perfect blend of horror and humor as it tells the story of one Tony Walker (starring Adam Arkin) as a star football athlete in the 1950’s who is bitten by a werewolf in Transylvania. Now cursed, he is forced to wander the earth until he scores a touchdown for his beloved high school: Full Moon High.

It has everything that I love when it comes to a great horror-comedy: a goofy over-the-top plot, outrageous satire, nicely done practical makeup effects and a genuinely funny cast who bring it all together.

So, to honor the Blood Moon of 2022, let’s sink our teeth into the wild and wolfy world of Full Moon High! 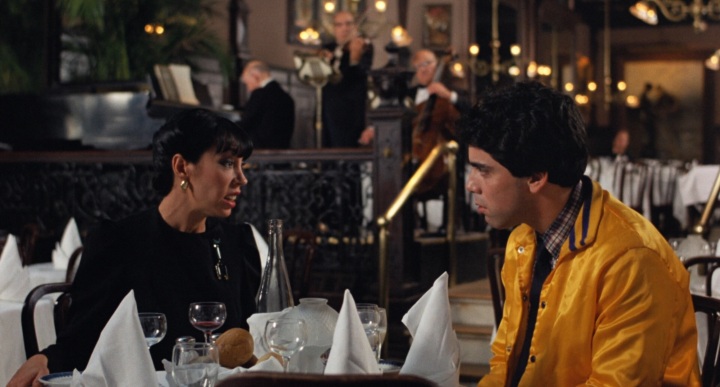 We have a very interesting and unique mix of actors and actresses for this film.

First up we have Adam Arkin as Tony Walker, the superstar athlete of Full moon High. He’s very enjoyable in the role as he navigates high school life, the dating scene and his lycanthropy. He’s very likable and funny, thus we sympathize with him more as he’s trying to figure out how to lift his werewolf curse.

Ed McMahon plays Col. William P. Walker, Tony’s father. He brings in a great performance with his wit and clever charm as the patriarch of the family; trying his best to be a good father to his son as he fights against Communists for America.

Jane (played by Roz Kelly) is Tony’s infatuated girlfriend who can’t stop loving him. She does a fantastic job in her over-the-top role that you do genuinely feel bad for her as Tony leaves her to try and figure out how to break his curse. She becomes even funnier later in the film as a mother in a strained, lackluster marriage to Detective Jack Flynn (played by Bill Kirchenbauer).

Elizabeth Hartman plays Miss Montgomery, a teacher who is down on her luck until she meets up with Tony.

Even the legendary Alan Arkin stars as Dr. Brand, an arrogant, pompous and sleazy psychologist who steals the show as he tries to capitalize on Tony’s lycanthropy in the 3rd act of the film.

Surprise cameos include the late Bob Saget as the sportscaster for Full Moon High and Pat Morita as a silversmith who is all too eager to make designer silver for Detective Jack Flynn instead of making silver bullets.

They all do a great job to make their characters memorable, funny and genuinely likable.

Now you maybe thinking, why on Earth am I including a violin in its own separate category? Well, without it the film would lose a unique piece of its charm and identity as a satire about werewolves.

For you see, something that not everyone realizes is the importance of the violin in not just classic werewolf films, but horror films in general. The original Dracula & The Mummy uses the violin to set the mood via the musical arrangement of “Swan Lake.” And a violin is used greatly in the original 1941 Universal classic The Wolfman. Thus, it does have great significance in this film.

Tony constantly hears a violin playing in the background, which interrupts him during his football practice. Even to the point that he tells it to just join a band already.

The violin is played during intense moments, such as Tony’s father fending off his werewolf son as he attacks him.

The violin itself becomes not just a parody, but goes beyond to become a supporting character that shows the passage of time in one scene. And it even gets to the point that one of the patrons at the football game tips it.

Talk about your Fourth Wall Breaking.

The plot itself is already off to a great, goofy start as it is set in the 1950’s during the Cold War. Star football athlete Tony Walker (played by Adam Arkin) travels with his father Col. William P. Walker (Ed McMahon) to Transylvania for a special assignment.

Taking the opportunity to let his dad “educate” two ladies on The Monroe doctrine (yes this is a real plot line in the film), Tony then meets a mysterious Romanian Fortune Teller (played by Janet Villella) who foretells his future via his hands (which she is very fond of reading) saying that he carries the mark of the Pentagram. Losing his way trying to find The Museum of Mental Illness, Tony is attacked by a werewolf in a small village. Now cursed, he remains ageless until the curse is lifted.

On a plane returning to the US, the plane is hijacked by terrorists who intend to fly it to Cuba (much to Col. William P. Walker’s dismay, calling them Communists). Tony then transforms into a werewolf and dispenses them. But that is only the beginning of his troubles as he transforms in the night, biting people on the butt and becoming the terror of his hometown.

After the death of his father, desperate to escape his curse, he catches a bus out of town.

Decades past and he finally decides that he can no longer live with the curse of the werewolf, deciding to return to his hometown to re-enroll at Full Moon High in order to fulfill his destiny: To score a touchdown at his high school!

There are other sub-plots as well, but I don’t want to spoil all the fun if you want to watch it out on your own.

Yes, it is silly, ridiculous and just plain insane. And I love every single minute of it! It’s the kind of fun, schlocky film from the late 70’s & early 80’s that you just roll with and see where it will take you next.

This movie came out in the heyday of the spoof film. From Airplane! to Blazing Saddles to History of The World: Part I, these were all the rage for their outrageous comedic plots, over-the-top performances and poking fun at society in general. And Full Moon High is no exception.

This includes a chicken on a hi-jacked plane getting blind-folded, Tony eating dog food and snarling at another dog, Tony trying to talk to a husky, various newspaper headlines expressing how annoying Tony is as a werewolf, Tony getting burned by some expensive silverware at a fancy restaurant and even Tony’s father talking to a photo of Joseph McCarthy, saying that Communists have turned his son into a wolf.

From the song “Meet Me in The Moonlight” playing as he terrorizes the helpless citizens of his hometown, to Tony even trying to show his filmed werewolf transformation to the local detective while at his high school, it just gets sillier and sillier the more the movie plays on.

Tony even scares off some high school students from buying drugs during the school dance when he shows up. Which is funny, because McGruff the Crime Dog made his first debut in 1980. Coincidence? You be the judge.

It’s that enjoyable, schlocky fun that we all need from time to time.

#1. The Use of Classic Werewolf Lore & Werewolf Films

Full Moon High does a fantastic job in paying tribute to various werewolf films of old and new in 1981 as it recreates, parodies and pays homage to them while forging its own zany identity.

There are many parallels to the 1941 Universal horror classic The Wolfman: the story of Larry Talbot (played by Lon Chaney Jr.) who is bitten by a wolf as he tries to save a woman named Jenny. Even the mark of the Pentagram is also a focus in the film to those would become victims of the werewolf.

Full Moon High cherry picks the best parts of the plot from The Wolfman and runs with it to the goal post.

It also falls into the same category as the schlocky 1957 horror film I Was a Teenage Werewolf. In this case, troubled teen Tony Rivers (played by a young Michael Landon) is hypnotized into becoming a monstrous beast. While Tony in Full Moon High is not a troubled teen by any means, he does become a public menace, much like Michael Landon’s character. And hey! They are both named Tony too!

I also could not think of this film without seeing other parallels to the 1981 werewolf classic An American Werewolf in London. Both films came out in 1981. Both have werewolf plots. Heck, even An American Werewolf in London came out on August 21st with Full Moon High running into theaters on October 9th! But where they greatly differ is that the former is a genuine horror film that was a modern update to the original Wolfman and Werewolf of London, whereas Full Moon High is at its heart a comedy spoof.

Heck, I just realized this and I need to point this out: 1981 was THE BEST YEAR FOR WEREWOLF MOVIES! Seriously! On March 13th 1981 you had Joe Dante’s The Howling coming out, then on July 24th you had the underrated horror classic Wolfen making the rounds, then you had An American Werewolf in London premiering on August 21st and then on October 9th Full Moon High crosses the finish line! So that’s FOUR werewolf movies being released during THE SAME YEAR! CRAZY!

Speaking of An American Werewolf in London earlier, one of my favorite werewolf references in the film is in a headline from The Hong Kong Express that reads “WOLFMAN EATS CHINESE: THIRY MINUTES LATER, HUNGRY AGAIN.” This is a major nod to the famous 1978 song “Werewolves of London” by legendary American singer-songwriter Warren Zevon.

And to round it all up, every kind of werewolf lore and trope is in this film.

So, let’s go down the full checklist shall we:
A mysterious Fortune Teller who foreshadows the fate of the main character? Check.
Pentagram on the hand? Check.
Changing into the beast during a Full Moon and howling at said Moon? Check.
Teens screaming in terror at the sight of the werewolf? Check.
Biting another person can turn them into a werewolf? Check.
Is hurt by anything that is made of silver? Check.
In the case of this film being at times a teen drama with teen angst? Check.
The curse of the werewolf being a possible allegory for puberty and/or passionate urges? Check.
A silver Bullet to end the curse? Check and the film even goes above and beyond with this trope because it takes more than one silver bullet to kill him due to economic inflation! Wow! That is incredible!

But even with all of that, Full Moon High still does enough to separate itself from the pack. This film, along with others being released in 1981, helped to inspire other werewolf comedies such as Teen Wolf (1985), it’s sequel Teen Wolf Too (1987) and the criminally underrated TV horror comedy series Big Wolf on Campus (1999).

So, there you have it. I hope you enjoyed this Top 5 List. If you know of any cool werewolf parody films for me to check out, please let me know. Or any good werewolf films in general. I’m always on the hunt for an awesome werewolf film that I can really sink my fangs into! Until next time dear readers, Keep on Howling!